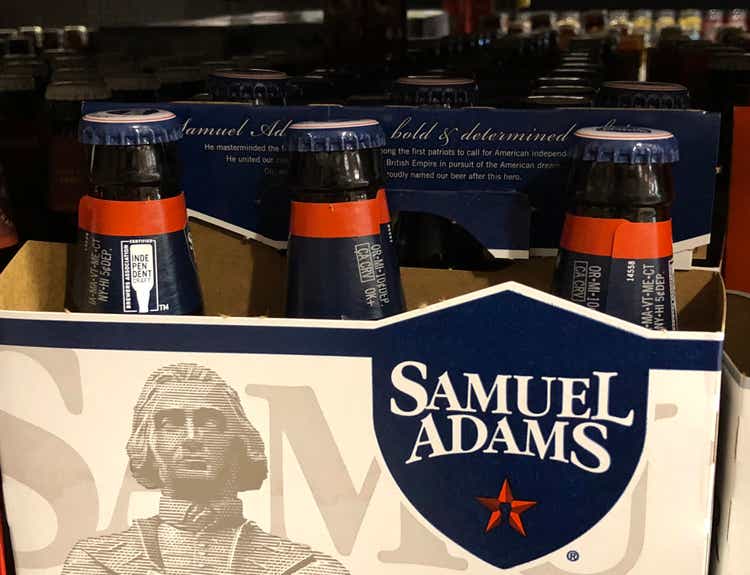 Boston Beer Earnings: Stocks are too expensive now, but a solid pick

Boston Beer Company (SAM) will announce its fourth quarter 2021 results on February 16, after announcing a decline on January 13 in advance. $6.00 per share. Shareholders are hoping the company can stem the tide of bad news that has arrived in recent months.

Boston Beer Company provided guidance for 20% revenue growth for the year, driven largely by Truly hard seltzer. Hard seltzer has been gaining market share in the beer category over the past few years, and Truly is the number two brand in the category, behind privately owned White Claw. The rapid growth of an otherwise stagnant beer category has attracted many competing products, leading to a fragmented market.

The company estimated that it currently has 24% of storage space dedicated to hard seltzers and is expected to gain shelf space in 2022 as retailers reduce low-volume brands. Sam Adams expects Truly to be a beneficiary of the consolidation, which they believe will drive Truly to outpace overall category growth by 0-10% in 2022.

Boston Beer has invested heavily to ensure a sufficient supply of Truly in 2021 after failing to keep pace in 2020; however, the growth rate declined throughout the year and the company was left with excess inventory and commitments to contract manufacturing partners that were no longer needed. The oversupply caused the company to reduce inventory in the third quarter and also led to the pre-announcement for the fourth quarter.

Founder and current chairman C. James Koch and his wife still own a significant stake in the company and retain control through Class B stock voting rights. It is therefore reasonable to assume that Boston Beer is managed bearing in mind the long-term benefits for shareholders. . The company felt it had to make the decision to invest heavily to be one of the winners in a rapidly changing category. Boston Beer Company lacks the weight and scale of Anheuser-Busch InBev (BUD), so they must use their agility to offset their disadvantages. Moving quickly adds risk, and in this case, it didn’t pay off. Koch and Dogfish Head Founder Sam Calagione have a passion for the industry and have always shown a willingness to take risks to drive innovation.

The category’s sales decline is not unprecedented, as Boston Brewing experienced a decline in barrels sold in 2016 and 2017 before resuming year-over-year volume growth in 2018. Even as hard seltzer sales decline, Boston Beer will always benefit from being one of the category leaders. The innovation is set to continue, with the launch of Hard Mtn Dew in the coming weeks. There was a lot of social media buzz surrounding the release, some of which led to Pepsi (PEP) and Boston Beer adding Baja Blast to the original three-flavor lineup.

Growth will continue in 2022

Boston Beer gave early guidance for 2022 of mid-single-digit volume depletion growth, and Hard Mtn Dew will likely be a key driver. The company expects prices to rise 3-6% this year, but that won’t be enough to offset continued pressure on margins. The company has forecast gross margins of 45% for 2022, continuing a multi-year trend of declining margins. Boston Beer only grew its net revenue per barrel by 11.5% in the eight years from 2012 to 2020, which is lower than inflation by about 14% over the same period. Although this could be seen as a weakness in pricing power, some pricing theorists believe that companies should share cost increases with consumers to promote brand loyalty. I think Boston Beer has been cautious with price increases, which makes the potential for a 6% price increase in 2022 notable.

Despite slowing sales and declining margins, Boston Beer has seen phenomenal revenue growth over the past five years. The company will likely end 2021 with net revenues above $2 billion, more than double the net revenues of $906 million in 2016. Operating cash flow increased from $154.2 million in 2016 to 253 .3 million in 2020.

The company will continue to invest in the business, with capital expenditures expected to be between $140 million and $190 million in 2022. Boston Beer spent an additional $85 million to $95 million on advertising and promotion in 2021 and plans to increase spending in the category by an additional $10 million to $30 million in 2022. It’s clear the company is focused on long-term investing, not trying to squeeze pennies to hit quarterly numbers.

Boston Beer also has other innovations in the works, with a cannabis product in development and new products co-developed with Beam Suntory (OTCPK: STBFY) expected in mid-2022. The company has also launched the Bevy Long Drink at the end of 2021. Although it is expensive to support many product lines, it gives the company many opportunities to succeed in a market where tastes change frequently.

Is it a purchase?

Boston Beer shares have more than doubled from their 2016 high of $204.25 to $432.52 at Friday’s close, but are well below the all-time high of $1,349.98 reached on April 23. from last year. Stocks should continue to be under pressure in the coming months as input costs rise and interest rates begin to rise before the tailwind from Hard Mtn Dew hits bottom line in the second quarter .

The company continues to grow and has a management team looking after the long-term health of the business. With Sam Calagione on board, the company will likely continue to innovate and adopt a long-term mindset long after C. James Koch leaves the company. The balance sheet is strong, with $434 million in total liabilities at the end of Q3 2021 versus $431 million in current assets.

The company currently has a market capitalization of $5.3 billion, trading at approximately 20.9x 2020 operating cash flow. effective taxation of 26%. Coupled with sales and price projections, this equates to a forward PE ratio of around 23. With PE ratio compression likely in the market with interest rate increases coming, I consider the stock a bit overvalued at present. I plan to wait for the stock to drop below $400 before adding to my current position, but I think Boston Beer is a strong long-term holding.