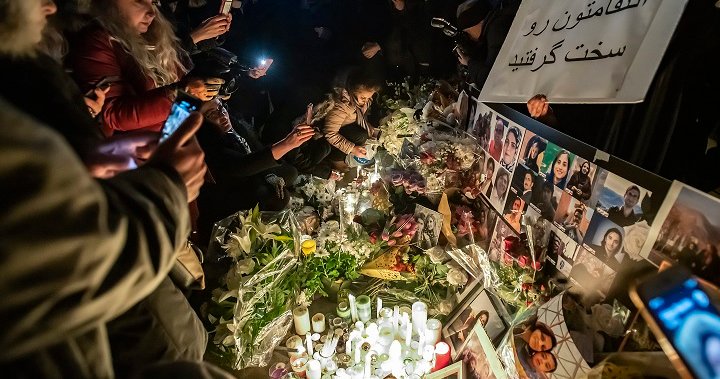 A new report accuses Iranian authorities of tampering with electronic devices and misidentifying the remains of some of the passengers killed on Ukrainian Airlines flight 752.

The findings are part of new revelations contained in a lengthy report by the Association of Families of Victims of Flight PS752 which examines the Jan. 8, 2020 shooting of the commercial airliner by the Iranian military.

All 176 people on the airliner to Kiev were killed when the Boeing 737-800 was shot down by a surface-to-air missile fired by Iranian Revolutionary Guards minutes after take off from the airport from Tehran.

Plane crash in Iran: what happened since flight PS752 was shot down?

Iran initially lied about the cause of the tragedy in the days that followed, but eventually admitted to downing the plane.

The new report says several cell phones and tablets of dead passengers showed signs of tampering in what could have been an attempt to cover up the cause of the crash.

“One likely explanation is that these electronic devices may have been bulldozed in an attempt to destroy any potential evidence the victims took in the last minutes of their lives,” the report said.

The families enlisted retired Toronto Police homicide detective Mark Mendelson, whose consulting firm examined a laptop and cellphones returned to families. He concluded that the aircraft “showed evidence of human handling” and showed no evidence of burns or other signs of damage consistent with the aircraft’s impact on the ground.

â€œThe fact that these memory / data components are missing is not consistent with the damage caused by a sudden and abrupt impact. Additionally, the fact that the screws were removed and the lids opened strongly suggests that concerted efforts were made to extract these components, making it impossible to review the data.

The report also says Iranian authorities have botched the identification of some of the victims, a revelation that will only increase the pain and suffering of those close to them.

“The association obtained evidence that DNA tests on the bodies of some victims did not match their identification declared by the Iranian authorities,” the report said.

â€œThis neglect on the part of the Iranian government has had serious psychological consequences for the families, some of whom did not receive the entire bodies of their loved ones and instead received the remains of other victims. “

The report accuses the Iranian authorities of “systematic cover-up” of the cause of the accident.

The airliner was shot down during a period of high tension after Iran launched missile attacks on bases in Iraq where US troops were stationed. Iran has said it is responding to a US drone strike that killed Iran’s top military commander days earlier.

The report says Iran’s claim that it shut down its western skies as a preventive measure was false, as flight tracking data showed other passenger planes in the air before the tragedy.

The report also states that a leaked audio file of a meeting between the former Iranian foreign minister and other senior officials, including senior military officials, shows an effort “to publicly spread the story that the theft PS752 had crashed due to a technical failure “.

Wednesday’s report builds on previous criticism that Canadian authorities have crammed the Iranian regime, including it dragging its feet for months before releasing the flight recorders.

In March, the Iranian Civil Aviation Organization blamed “human error” for the incident, saying an operator fired two surface-to-air missiles after misidentifying the Boeing 737-800 as a “hostile target “and despite the fact that he did not get the green light from his superiors. , by procedure.

The Canadian government rejected the Iranian report, calling it “incomplete” and devoid of “hard facts or evidence”.

In the report, he reiterates the association’s point of view that Canada and other countries that have lost nationals on the plane must use “all available means, including the International Court of Justice (ICJ) and the International Criminal Court (ICC), for the perpetrators of this crime to justice.

Speaking at a press conference Wednesday to release the report, Esmaeilion said the association demands an impartial international investigation.

â€œThere are still many unanswered questions. We have to get the truth to get the closure. I can not describe? what we’ve been through over the past two years, â€he said.

In an email to Global News on Wednesday, a spokesperson for Global Affairs Canada said the government’s priority continues to be supporting the families of the victims: “We will not rest until they have got the justice and accountability they deserve.

â€œThe Government of Canada has received a copy of the family association report and is reviewing it,â€ said Grantly Franklin. â€œCanada and its coordinating group partners are working to hold Iran accountable in accordance with international law.

“Our position is that Iran is responsible for the downing of flight PS752 and has an international legal obligation to provide full reparations to the affected states.”

The International Coordination and Response Group for the Victims of Flight PS752 also released a statement on the report on Wednesday.

“We, the ministers representing Canada, Sweden, Ukraine and the United Kingdom, express our deep disappointment that the Islamic Republic of Iran has not accepted our multiple requests to meet on November 22, 2021 to negotiate on the issue. repairs for destruction. of flight PS752, â€the press release said.

“We remind the Islamic Republic of Iran that it must fulfill its international legal responsibility to grant full reparations to the group of countries and thus reiterate our call to negotiate in good faith and to do so before the end of This year.

â€œWe will continue to stand in solidarity with the families and loved ones of the victims of PS752 in their deep loss and suffering. They can be assured that the coordination group will stand united in its goal of holding the Islamic Republic of Iran responsible for this tragedy. “

The group’s statement also said that if Iran continues to “avoid negotiating with the group,” it “will have no choice but to seriously consider further actions and measures to resolve this issue within the framework. of international law “.

Does the impressive stock market performance of JLT Mobile Computers AB (publ) (STO: JLT) have something to do with its fundamentals?