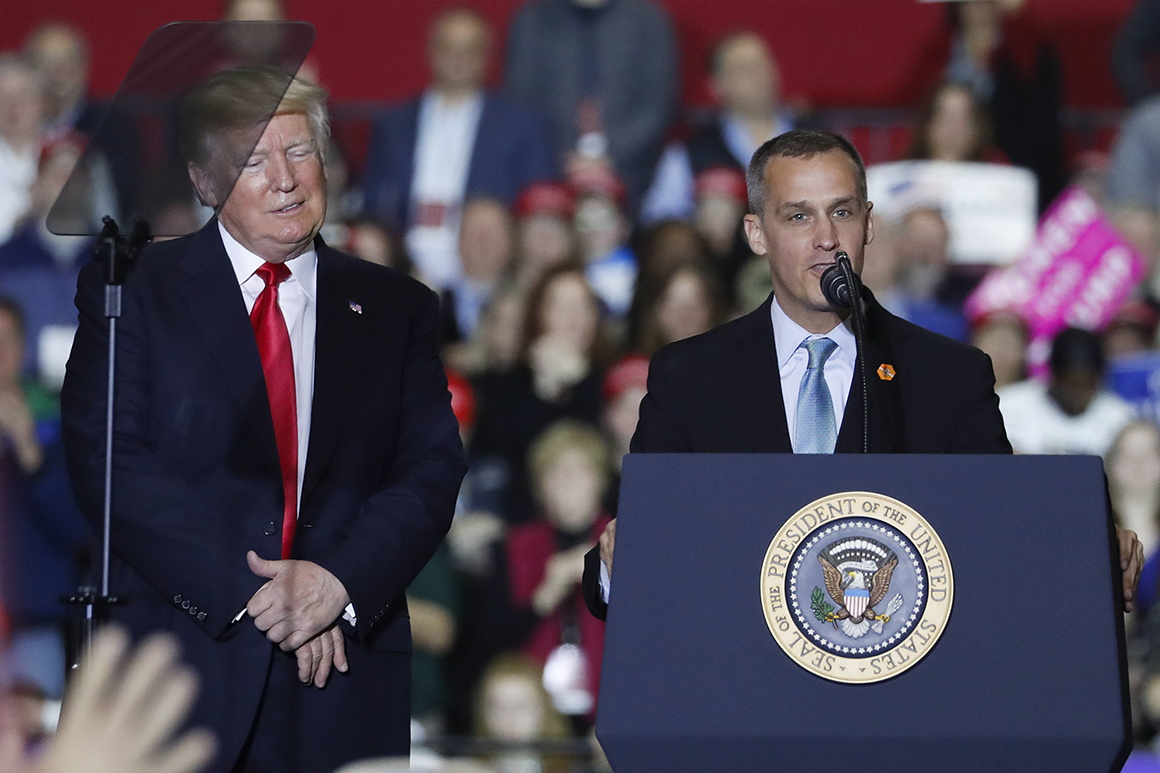 â€œOn the evening of September 26 in Las Vegas, Nevada, I attended a dinner to support a charity and spend time with wonderful friends,â€ Odom said in a statement to POLITICO. “He repeatedly touched me inappropriately, said vile and disgusting things to me, harassed me and made me feel raped and fearful,” she said, referring to Lewandowski .

“I’m showing up because he needs to be held accountable,” Odom continued. â€œI am fortunate to have a loving husband and family behind me. I want other women to know that you can be heard too, and together we can prevent terrible things like this from happening. “

David Chesnoff, a Las Vegas attorney representing Lewandowski, did not directly respond to the allegations. “The accusations and rumors seem to be changing by the minute and we will not honor them with another response,” he said.

Lewandowski, who did not respond to multiple requests for comment, has positioned himself as one of Trump’s closest and most loyal advisers – a role he has tapped into to access major Republican donors and claim a influence on the leadership of the Republican Party. He served as Trump’s first presidential campaign manager in 2016, advised him during the presidency, and is now part of the circle of aides advising the former president. His duties included leading a pro-Trump super PAC until Wednesday, when Trump spokesman Taylor Budowich tweeted after the publication of this article that “Trump World” had severed its association with Lewandowski.

“Pam Bondi, the very talented and honorable [former] AG of FL, have all our faith and confidence in the takeover of the super PAC, we read in Budowich’s tweet. “Corey Lewandowski will continue other efforts and we would like to thank him very much for his service. He will no longer be associated with Trump World.”

Odom was one of some two dozen major Republican donors at the Sunday dinner, held at the Benihana Restaurant at the Westgate Las Vegas Resort & Casino. Odom was seated next to Lewandowski at the rally, part of a four-day conference hosted by Victoria’s Voice Foundation, a charity dedicated to the fight against drug addiction. South Dakota Governor Kristi Noem, to whom Lewandowski serves as an informal adviser, was also among the dinner attendees.

According to a statement provided by an attorney for the Odom family, Lewandowski allegedly commented on the size of her genitals, described her sexual performance and showed Odom the key to her hotel room. After the incident, Odom told people that Lewandowski repeatedly talked about sex using profanity.

Participants also observed that Lewandowski physically grew up with Odom.

â€œMs. Odom said that over dinner Mr. Lewandowski tried to hold her hand and she pushed his hand away. He touched her leg and she pulled it away. He grabbed her napkin. on her knees and tried to touch her leg again, and she pulled her dress over her leg, to move her hand away and cover her skin, â€Odom’s lawyer wrote in the statement.

“He hit her in the back and she tried to run away,” the statement continued. â€œHe described an area where he was sore from a workout, on the side of his butt, but he demonstrated it by touching it there, on the upper part of his hindquarters. Lewandowski tried to touch her about 10 times, and Ms. Odom always pushed him away.

Odom left the room but was quickly followed by Lewandowski, who remarked that she had a “nice ass,” according to the statement from her lawyer and another attendee who overheard the comment. Lewandowski also “threw her glass at Ms Odom, and it landed all over her shoe and the hem of her dress” and “called her stupid,” her lawyer said.

An event attendee who spoke to POLITICO said Odom then recounted the incidents in detail, describing how she feared for her personal safety while Lewandowski described incidents of violence that took place earlier in her life .

Odom and her husband are new to the Republican donor scene, and she told the participant she felt intimidated by Lewandowski’s claims that he controlled the former president’s orbit and could determine the fate. of those around Trump.

In Odom’s attorney’s statement, Lewandowski is said to have said “on several occasions that he is very powerful and can destroy anyone”, and that he “is close to President Trump and can get anyone elected. who or eliminate anyone â€.

â€œCorey was verbally and physically aggressive and energetic,â€ Odom said in a statement. â€œI was afraid for my physical safety. She continued, “I was also concerned that Corey had the power to destroy and ruin everything my husband and I worked on in our business, personal and charitable endeavors.”

Two of those at the dinner described Odom as appearing uncomfortable, and three attendees said Lewandowski appeared to be intoxicated. Photos of the dinner reviewed by POLITICO show Odom posing for selfies with attendees. Several photos showed Lewandowski just above his right shoulder, with his tongue sticking out of his mouth.

Odom then left the restaurant for an after-dinner party at the hotel’s lavish Verona Sky Villa, where witnesses described a chaotic scene. One person who interacted with Odom recalled seeing her in tears and asking for help. By this time, she had been joined by her sister and stepson, who had accompanied her to Las Vegas.

Participants said Odom retreated across the bar with her sister and stepson when Lewandowski came to the villa. Lewandowski followed her, at which point several other attendees tried to protect Odom from him, guiding her to another part of the bar, according to three people in attendance. According to Odom’s attorney, “Corey then went around the bar with them” and continued “to try to touch Ms. Odom”.

Attendees said Odom and Lewandowski left the party separately. Odom told one person and later told the family’s lawyer that she feared for her physical safety by staying at the hotel that evening, as her room was located next to Lewandowski’s. She also told these people that she had scheduled her departure the next day to make sure she did not run into him.

This is not the first time Lewandowski has been accused of unwanted touching. In late 2017, singer Joy Villa filed a police report alleging that Trump’s former campaign manager slapped her buttocks during a holiday party at the Trump International Hotel in Washington, DC.

Lewandowski was also charged with drums in 2016 after he tore the arm of journalist Michelle Fields at a Trump event. The charges were later dropped, but Lewandowski claimed the incident never happened until video was released confirming it did.

Lewandowski, 48, has long been one of Trump’s best lieutenants. He was fired from his post as presidential campaign manager before Trump was appointed to the Republican National Convention in 2016, but he has remained a key figure in Trump’s inner circle, serving as an informal adviser and one of his. most prominent substitutes.

A Trump spokesperson did not respond to a request for comment, although news of the incident rocked the former president’s inner circle, several people familiar with the talks said.

The roost has given Lewandowski access to some of the Republican Party’s biggest donors – a list that includes Trashelle Odom and her husband. The couple donated $ 100,000 to the super PAC, according to two of those familiar with the matter.

But those close to the Odoms have said the couple will ask for their money back unless Lewandowski’s ties to the super PAC are severed, which happened late Wednesday night.

â€œI love my wife and want accounts now,â€ Trashelle’s husband John Odom said in a statement. â€œWe are exploring our legal options at this time to ensure [Lewandowski] can’t hurt anyone else.

Meridith McGraw contributed to this report.