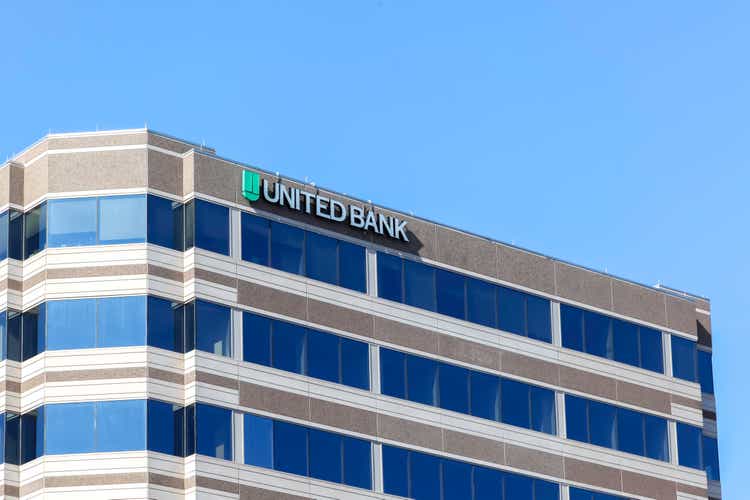 United Bankshares (NASDAQ: UBSI) had humble beginnings in 1839 as a regional bank in West Virginia. Over the years, the company has taken advantage of several growth opportunities and has become one of the top fifty banks in the United States through numerous well-managed mergers and acquisitions. With dual headquarters located in Washington DC and Charleston, WV, United Bankshares holds over $29 billion in assets and continues to grow. It became a publicly traded company in 1987 and has since completed thirty-three acquisitions with 222 full-service banking offices and twenty-two loan origination offices in its footprint of Virginia, West Virginia, Maryland, Pennsylvania, Ohio, North Carolina, South Carolina and Washington DC

In this article, I will illustrate the strong foundation United Bankshares maintains to promote growth, increase profitability, minimize risk and why a bullish stance could provide benefits in the years to come with ever-increasing dividend increases for its investors. .

United Bankshares has a history of successful mergers and acquisitions. The acquisition of Virginia Commerce Bank took place in 2013 and Bank of Georgetown in 2016. 2017 saw the acquisition of Cardinal Financial Corporation, resulting in the company now owning over $19 billion in assets. In November 2019, the company announced that Carolina Financial Corporation, the parent company of CresCom Bank, had entered into a merger agreement increasing United Bankshares from approximately $19.8 billion in assets to approximately $25 billion, which was concluded in May 2020.

And finally, in June 2021, the company announced that Community Bankers Trust, the parent company of Essex Bank, had entered into a merger agreement, which was finalized in December 2021, resulting in it owning approximately $29 billion in assets, ranking it first. 41st largest banking company in the United States by market capitalization.

Through all the growth United Bankshares has achieved, it has consistently lived up to its investors, with forty-eight consecutive years of shareholder dividend increases. This despite several difficult periods for the financial sector, including the financial crisis of 2008. United Bankshares not only performed well, but declined funds offered by the US Treasury through the Troubled Asset Relief Program (TARP) following the financial crisis. of 2008 – a true indication of the quality of its assets.

As reported in the fiscal 2021 financial statements, the company holds $29.4 billion in assets and reported record profits for the year. Additionally, the bank’s asset quality remains cautious with NPA loans of just $90.8 million in 2021, compared to $132.2 million in 2021. It continues to be well capitalized, in line with regulatory guidelines.

As its assets grew, United Bankshares improved its bottom line year-over-year. Net income for 2021 reached $368 million, increasing from $289 million in 2020, $260 million in 2019 and $256 million in 2018. The bank’s main revenue driver is interest income from all loans and leases with additional income from its brokerage. , trust, mortgage and custodial services.

The company’s mission is to provide “service excellence to our employees, customers, shareholders and communities”. This mission is manifested in the value they place on their employees. Each year, the main expenses reported relate to compensation and employee benefits. This commitment to its employees fosters dedication, a strong work ethic and employee retention – all leading to the growth and performance that United Bankshares has demonstrated over time.

In fiscal 2021, United Bankshares held approximately $3.8 billion in cash and cash equivalents, which increased from $2.2 billion in fiscal 2020. Its largest current asset is related to interest-bearing deposit accounts reaching $3.5 billion. Total borrowings decreased by $60.4 million, or approximately 6%, from fiscal 2020, with short-term borrowings decreasing by 9.5% to $129 million. The most recent acquisition of Community Bankers Trust added $6.8 million in short-term borrowings.

However, everything was repaid at the end of the year. The most recent acquisition also added approximately $260 million in equity with more than seven million shares authorized but not issued. This resulted in an increase in retained earnings to $185 million or 15.4% since fiscal 2020. The company’s capital ratios also exceeded all regulatory requirements as of fiscal 2021.

To pass the baton

In February 2022, United Bankshares announced board approval of an executive leadership reorganization effective Q2 2022. Outgoing CEO Richard M. Adams will become executive chairman of the board with his son, Rick Adams, Jr., stepping up to become CEO. At the same time, Jim C. Consagra – currently COO – will become President. Rick Adams, Jr. joined the bank in 1994 after practicing law at Bowles Rice, LLP and most recently served as president. Jim Consagra joined the bank in 1998 following the acquisition of George Mason Bankshares, where he served as Chief Financial Officer and Treasurer.

In March 2022, the company announced the board’s approval of the promotion of Julie R. Gurtis to president. Julie Gurtis most recently served as Executive Vice President and Chief Commercial Banking Officer for the bank; however, his 31-year career included roles such as commercial lender, market president and regional president. The transition of a bank president, Michael P. Fitzgerald, to vice chairman of the board was also announced. Fitzgerald was the founder, president, president and chief executive officer of Bank of Georgetown, acquired by United Bankshares in 2016. Fitzgerald plans to continue to focus on business development and client relationships.

While changes do occur, the amount of experience gained in these vital roles is unparalleled and supports growth and continued performance.

Net interest income for 2022 is expected to be between $780 million and $800 million, which is a significant increase from $724 million in 2021, benefiting from higher market interest rates. Non-interest expenses are expected to reach $570-580 million, which is consistent with what was reported in 2021. These growing numbers of consistent revenue and expenses will prove lucrative for the bank’s bottom line in 2022.

The company’s investment thesis touts long-term growth prospects with an expanded market footprint. It offers a current income opportunity with a dividend yield of around 4% based on recent prices. Again, Tatterson reinforces the “performing bank with a low risk profile” strategy, citing United Bankshares’ performance throughout the financial crisis and beyond. It is evident that it has been and will remain profitable and will hold a substantial market share within the industry.

With a record of year-over-year dividend increases with proven performance during the darkest times, United Bankshares is a beacon of progress and prosperity. Its management team is experienced with long-serving employees taking on vital responsibilities. The company will likely continue to grow, capture more market share, increase profitability, and ultimately continue to improve dividends for investors who take a bullish stance with a buy-and-hold strategy. conservation.

FRP Holdings: many free options and insiders own 35% (NASDAQ:FRPH)

“The double standard sends me to the brink”: Nicôle Lecky on sex work and shame on her show, Mood